Hands Up In The Air


4.5 minutes after I read that a grand jury decided not to indict officer Darren Wilson, I sent a text to my sister in North Carolina.

"You need to get my baby out of that f*&&ing racist place called the U.S. south!"

'My baby' being my one year old precious baby nephew. A few weeks before my sister had sent me a video of my nephew at a Yo, Gabba Gabba concert, a one year old at his first live musical concert! He is wiggling and dancing in my sister's lap. Dimpled fat cheeks, laughing, eyes wide open, hands up in the air. I watched that video on repeat, laughing, tears rolling down my cheeks.

My sister and I text back and forth debating on where is the safest place to raise a young black boy. What city can he be guaranteed a chance to reach manhood? We can't think of one...

The absurdity of our conversation is not lost on me, neither is the realism of the conversation; we are trying to save a life. Later, my mother weighs in on the conversation, after all, this is her first and only grandchild. She has the audacity to want this little boy to live.  She has plans to attend his foot ball games, piano recitals, graduation, perhaps some day if she allows herself to dream boldly... his wedding. We know if we do not act soon we will run out of time. My mother shares that she has read on the internet that Hawaii has the least amount of black men in prison, plus she assures me that President Obama was raised there.  Do we dare to hope that he could live? And perhaps some day even be president? We quickly do the math. My sister had three more years to finish her PHD, and then as a family, we can swiftly make our exodus to Hawaii!  We speak in hushed, nervous but excited tones.  I swallow the rising bitterness that begins to swell in my throat and grow in my heart as the realization hits me that this is a conversation my white friends will never ever have to have with their mother or sister. In three more years my precious baby will only be four years old. His black skin and maleness will not yet be deemed a threat. Now when he puts his hands up in the air, he is an adorable, dancing baby. For now he is safe...

I read the transcripts of Mike Brown's friend, Dorian Johnson, who was with him the day he was gunned down by officer Wilson.  I learn that Mike Brown also had his hands up in the air,  as officer Wilson fires several shots which hit Mike Brown's,black body, two of them in his head. Before he falls to the ground, Mike Brown, gasps, " I don't have a gun..."
` 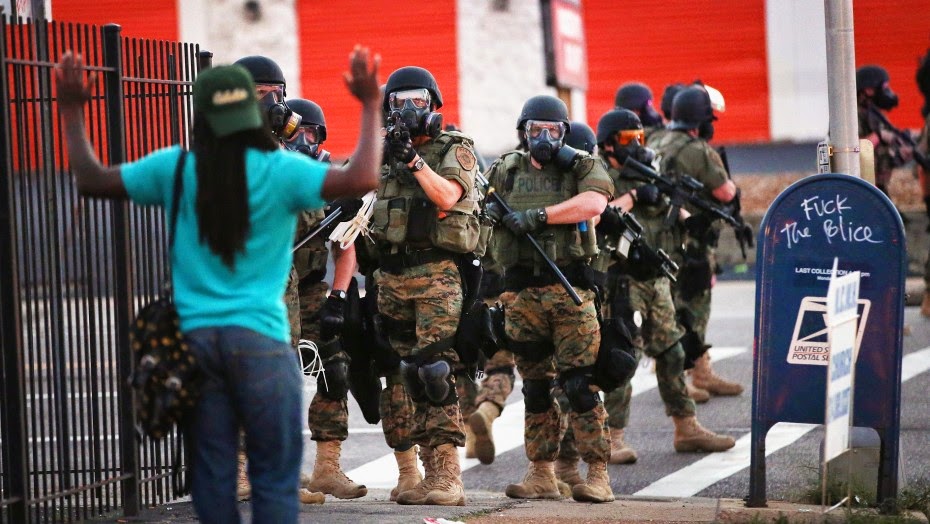 As I continue to read, the ever present black fatigue threatens to overtake me again; the bitterness I can no longer swallow.  Hawaii seems too far away. I fear that we are running out of time.  I know with certainty that death can creep upon black boys lives in an instant, when they are on their way home from buying skittles, or as twelve year olds playing in a park, or when their hands are up in the air.  I know their lives aren't worth much. No matter have many hash tags are now trending I know that #blacklivesdontmatter.

Wow. Thank you for articulating so honestly and openly what so many of us black mothers are feeling. At some point I had to stop reading articles about the Ferguson trial and the young black boy shot and killed for carrying a toy gun. I just couldn't take it in. I was paralyzed by fear. My cheeky and adorable black sons have no idea that time is running out for them. One of them is almost eight and I know I need to start thinking about having "the talk" with him. I can't take away his innocence just yet. He still waves at police officers when they drive by. They are still his heroes. He has no idea, but I do and the fear feels paralyzing. Thank you again. It helps to have someone say what I cannot.