Not quite ready to be a dyke with a tyke 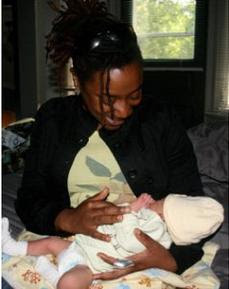 When I was 21 I made the huge declaration that I was going to be married and have a house in the suburbs, two kids, and a wonderful husband who loved to cook!

Now fast forward a few years — okay, fast forward quite a bit — and life looks a lot different. I have the property, not in the suburbs, but a cool, chic downtown condo. No husband — by choice . . . and no kids.

And when you hit your mid-30s you are bombarded with the question. I know many of my straight friends in their 30s are in a panic about not being able to pop one out or even being able to find a man to just do the damn deed with!

For years, being queer has allowed me to bypass the annoying baby bullet question. Because when I announced I was queer, that announcement pretty much confirmed to my family that this womb was now out of service. But a few baby-happy lesbians messed that up for me, and I am now surrounded by endless gay friends popping out babies by the dozen or taking a trip to the local Children’s Aid Society to adopt. The single, queer, independent, happy, funky, cool, artist (i.e., me) is now a dying breed.

Of course, this baby-booming epidemic in the queer community has not escaped my grandmother or my mother. They now have a renewed sense of hope that my queer womb can be saved and restarted. My grandmother has taken out the baby starter cables and happily chases me around the house. Upon seeing the new bundle of joy of my two favourite lezzy friends, my grandmother declared, “Trey why don’t you just go tomorrow to where they went and go and get a baby!”

So last month I found myself in a wonderful two-day intensive course called Dykes Planning Tykes — a workshop for queer womyn planning on having children. I must admit I felt a little out of place, being that I was the only single womyn there and everyone else was partnered up in lesbian couple bliss. However, the course did not disappoint. Every mystery on how to have a child without having the convenience of a hot-blooded male partner beside you was discussed.

I learned more about ovulation and what goes on down there than I cared to know. I learned about good sperm, bad sperm, swimmers, known donor and unknown. I was thinking I could actually do this until the last day, when they brought in gay couples, singles . . . and their children.

My academic baby bliss was abruptly destroyed by the reality; the noise, the chaos, the baby poop, the frayed expressions on the mothers’ faces, the children running around the room screaming at the top of their lungs — that was just a bit too much for me. I had to take a deep breath and wonder whether I was really ready for this and was this something that I wanted to do alone.

As much as I present as a strong, capable, independent womyn, I’m scared to have a child on my own. I want to have a partner to share the responsibility with. I want us to read bedtime stories together, attend school recitals together, and take turns staying up when little Johnny has the flu.

And yes, in so many ways I have thumbed my nose at tradition, but deep down there is something in me that wants that, wants it more than I know. And maybe it’s because I’m the product of a single parent household and have romanticized what a “family” is, but I know for me that’s what I want.

So for now I will just revel in the role of being cool Auntie Trey, who lives downtown, rides a scooter . . . and doesn’t push a stroller.